A Brief History of Audio Players

The modern age has blessed us with the ability to capture and play back sound. From the phonograph to MP3, we're forever improving audio technology in a quest to make music more accessible. How will we listen to music in the future? If the past is any indication, the preferred format will be smaller, faster, and beyond our wildest dreams. Here is a brief history of audio formats past, and a peek into how we might listen to music in the 21st century.
Phonograph
By the beginning of the 20th century, recordings were being manufactured worldwide by companies like Gramophone for a growing market of home machines. Everyone, it seemed, was interested in the "talking machines." Advances came fast and furious for the phonograph by the middle of the 20th century. "Long players," or LPs, came along in 1947, spinning at 33 1/3 revolutions per minute. They held more songs and rendered the faster-spinning 78 RPM discs obsolete. Along with 45s, which sparked an entire hit-making jukebox industry, LPs thrived until the late 1980s.

The proliferation of electricity and the jazz age both helped turn the phonograph into one of the most celebrated inventions of the modern era. That is, until radio came along.
Radio

It's hard to imagine a world without radio, but the technology has only been around since the 1920s.The theoretical basis of the propagation of electromagnetic waves was first described in 1873 by James Clerk Maxwell in his paper to the Royal Society A dynamical theory of the electromagnetic field, which followed his work between 1861 and 1865.

Radio was originally developed for military use during World War I, but the gramophone industry helped spur demand for recorded music delivered over the air. When the Radio Corporation of America (RCA) acquired the Victor Talking Machine Company in 1929, the modern era of the music industry was born.
8-track 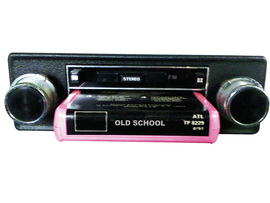 Invented in the early 1960s by William Powell Lear, and heavily marketed and used in the '70s, the 8-track was the premier portable audio format for almost 15 years. The 8-track was designed around a single reel with the two ends of the plastic recording tape joined with a piece of conductive foil tape to make one continuous loop. A motorized capstan in the player rolled against a pinch wheel inside the cartridge to pull the tape across the player's read head. The tape was pulled from the inside of the reel, passed across the opening at the end of the cartridge and wound back onto the outside of the same reel.

The 8-track was notorious for bad sound quality due to slight misalignments between the tape and tapeheads, causing bleeds or "shadows" of other musical tracks on the tape. The typical 8-track contained about 40 minutes of music.
Cassette Tapes

Cassette Tape The cassette as we know it didn't come into the average home until the late 1970s. However, magnetic tape recording got its start in music studios around 1950. Musicians could record in longer sessions, and seamless splice editing allowed artists and producers to select and combine the best cuts into polished songs. The allure of magnetic tape as a recording medium blossomed.

Cassettes outlasted 8-tracks because they were more compact and sounded better, thanks to the efforts of Dolby Laboratories. The debut of Sony's Walkman in 1979 was the final nail in the 8-track's coffin; cassette tape sales soared into the '80s.
Compact Disc

Compact Disc A compact disc (or CD) is an optical disc used for storing digital data. It was originally invented for digital audio and is also used as a data storage device, a CD-ROM. CD-ROM reading devices are frequently included as a component in personal computers. In general, audio CDs are distinct from CD-ROMs, and CD players intended for listening to audio cannot make sense of the data on a CD-ROM, though personal computers can generally play audio CDs. It is possible to produce composite CDs containing both data and audio with the latter capable of being played on a CD player, whilst data or perhaps a video track can be viewed on a computer. Lately, with the advent of MP3 technology, audio player devices have been developed that can interpret MP3-formatted tracks on a CD-ROM and play them like a traditional audio CD. The advantage of MP3 is that it increases CD storage capacity by up to ten times without significant degradation in sound quality.
Digital Audio Tape

Digital Audio Tapes (DAT) Introduced in 1987 for the studio market, digital audio tapes quickly became de rigueur in professional recording industry circles. Although DATs never fully caught on in the consumer market because of the high cost of DAT players, they remain a mainstay of the pro-audio world because of their low price and enhanced digital storage capabilities. Another factor helped keep DATs from catching on with consumers: A tax was added to each tape sold, earmarked to compensate music companies for songs that could be pirated. Most DAT users today use computer-grade DAT tape to circumvent the tax.
Mini Disc

MiniDisc MiniDisc (MD) is a disc-based data storage device for storing any kind of data, usually audio. The technology was announced by Sony in 1991 and introduced January 12, 1992. MD Data, a version for storing computer data was announced by Sony in 1993, but it never gained significant ground, so today MDs are used primarily for audio storage. The audio discs can be premastered or recordable (blank). Premastered MDs contain audio data and work in a way very similar to CDs. Recordable MDs can be recorded on repeatedly; Sony claims up to one million times. Today, there are 60-, 74-, and 80-minute discs available. Rerecording is possible through a magneto-optical system. A laser heats one side of the disc to its Curie point, making the material in the disc susceptible to a magnetic field, whilst a magnetic head on the other side of the disc gives the heated area a north or south polarity, equivalent to the 0s and 1s in a digital recording. Marketed exclusively by Sony, MiniDiscs have captured a small, but devoted, segment of the consumer market since 1998. Fans of the MiniDisc swear by its size, recording ability, and durability. Although very popular abroad, the MiniDisc has never taken off in the United States.
MP3

MP3 Invented in 1989 in Erlangen, Germany, MP3 has quickly come to symbolize a paradigm shift in the way many people access their music. The home computer revolution, along with the Internet, has allowed millions of Net-connected music fans to take advantage of the latest audio medium.

Short for Moving Picture Experts Group, Audio Layer III, MP3 is a compression format that shrinks digital audio files with negligible sound-quality degradation. In 1997, the format truly realized its potential, thanks to a man named Tomislav Uzelac, who created the AMP MP3 playback engine. The first MP3 player was invented just in time for the Napster revolution in the form of 1998's Winamp -- widely regarded as the first free, consumer-ready MP3 player.
AAC  -  MP4
Conclusion....
The 21st Century and beyond If the past is any indication of how you will listen to music in 20 years, expect the unexpected. Rapid advances in chip technology could bring a Bluetooth-type chip into the audio world. We could all be "pierced" with microchips instead of earrings. Those chips may enable you to walk into a music "station" and call out the name of the song you want to hear, only to have it start to play right into your inner ear. The future of music no doubt involves convenience, and some form of the celestial jukebox. Access to every song ever recorded will be at your fingertips - or more likely your vocal chords, as voice-recognition technology will likely become seamlessly integrated into our music-selection process.