This project will have you explore MIXCRAFT and its ability to create Beats & Loops for song/music construction.  You will be creating a music composition/project that will consist of FOUR different BASS & DRUM loops.
What sounds do you need?

Drums
Most hip-hop beats revolve around the components of the standard drum kit: kicks, snares, hi-hats (open and closed), crash cymbals, ride cymbals, and toms. Handclaps and finger snaps have become part of the standard hip-hop drum palette as well.

There are two kinds of drum sounds, synthetic (“fake”) and acoustic (“real”). Synthetic drums are the heart and soul of hip-hop (and most other pop and dance music at this point.) There are tons of software and hardware drum machines out there, but there are three in particular you should be aware of. Acoustic drums are less common in hip-hop, though not unheard of
Bass
Hip-hop uses synth bass the vast majority of the time. Your DAW comes with a variety of synth bass sounds, including the simple sine wave sub, the P-Funk Moog bass, dubstep wobbles, and many others. For more unusual bass sounds, try very low-pitched piano or organ. Bass guitar isn’t extremely common in current hip-hop, but it’s worth a try. If you want a 90s Tribe Called Quest vibe, try upright bass.

In the past decade, some hip-hop producers have followed Kanye West’s example and used tuned 808 kick drums to play their basslines. Kanye has used it on all of his albums since 808s and Heartbreak. It’s an amazing solution; those 808 kicks are huge, and if they’re carrying the bassline too, then your low end can be nice and open. Another interesting alternative is to have no bassline at all. It worked for Prince!

And what notes should your bass be playing? If you have chords, the obvious thing is to have the bass playing the roots. You can also have the bass play complicated countermelodies. We made a free online course called Theory for Producers to help you figure these things out.

Chords
Usually your chords are played on some combination of piano, electric piano, organ, synth, strings, guitar, or horns. Vocal choirs are nice too. Once again, consult Theory for Producers for inspiration. Be sure to try out chords with the aQWERTYon, which was specifically designed for this very purpose.

FX
For atmosphere in your track, ambient synth pads are always effective. Also try non-musical sounds like speech, police sirens, cash registers, gun shots, birds chirping, movie dialog, or whatever else your imagination can conjure. Make sure to visit Freesound.org – you have to sign up, but it’s worth it. Above all, listen to other people’s tracks, experiment, and trust your ears.

This project will have you explore MIXCRAFT and its ability to create Beats & Loops for song/music construction.  You will be creating a music composition/project that will consist of FOUR different BASS & DRUM loops.  A template has been set up for all students to use.

​Procedures:
1.  Download and open the BACKBEAT PROJECT TEMPLATE.
2.  You will notice that there are markers at the top to designate the 4 different patterns that you will create. 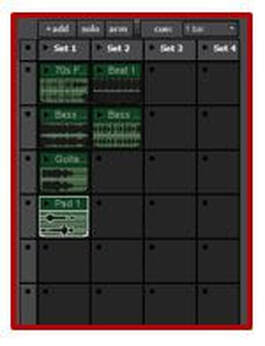 9.  Continue process to make four SEPARATE backbeats.  Back beats should be of different styles.  This is NOT a complete song project!
10.  Save your project in the MUSIC SHARE FOLDER (Project 6b, Last Name)
CLICK HERE FOR THE PROJECT DIRECTIONS (pdf)